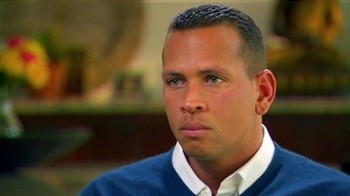 …who to trust anymore.

All of us who were hoping that he would bring baseball out of the steroid era were proven wrong when he admitted to using performance-enhancing drugs today to Peter Gammons.

If he had vehemently denied it, we never would have believed him.  Even now, when he’s saying that he used PEDs between 2001-2003, should we believe him?  Obviously, he could be lying–it’s not too hard, there was no polygraph, and the guy from Lie to Me* wasn’t there to do his job (haha).

I was always deluded enough that I thought that if a guy used steroids, he would be big, like Barry.  That he would look disgustingly muscular, like a brick wall.  That was wrong, obviously.  And now I’m starting to doubt everyone.

You look at guys whose playing styles have changed very quickly.  Tulo, for example–great in 2007, flop for most of 2008.  Did someone take away his PEDs?  I hate to ask these questions, but they are flowing freely through my head.  Hunter Pence’s sophomore suckage?  All the boys I love most are under suspicion.

There were rumors about Jeff Bagwell.  Were they true?  What about the less obvious guys?  Anybody?  Do we really even have a way to know?

I think the MLBPA is at least partially to blame.  I’ve hated them for a while now.  I got tired of hearing about their collusion ideas when nobody would sign Barry (really?  because signing a guy indicted for felonies is ever a good idea?).  They fought against random testing because they said it violated players’ privacy rights.  Any employee at any company could say the same thing but guess what, if you don’t take the drug test, or if you fail it, you’re FIRED.  There are no tearful interviews with really old guys to fix your life.  No income, bad references, and if it was a bad bad drug, you might go to jail.

I don’t understand why celebrities always think they’re exempt from the laws that the rest of us have to follow–oh wait, it’s because they are.  They admit to doing drugs, they drive drunk.  And no matter what they’ve done, an apology on someone’s daytime TV show is always good enough to get them out of trouble.

We as Americans have to stop idolizing athletes for anything other than their physical prowess.  They do drugs.  They cheat on their wives.  Just like any other human being, when they admit to something, we have no way of knowing if they’re telling the truth.  I joke that I want to grow up and be Mrs. Tulowitzki one day, but would I really like to marry him?  Hell no.  Find me a guy who looks exactly like him, has the same dedication, graduated college and is Catholic, and I’m sold.  But a baseball player?  Nope.

Well, I guess this is the end of my long-winded rant.  One of my best friends just moved back to CO and keeps telling me how great it is, and I’m jealous and frustrated with scholarships and college.  It hasn’t been a pretty day.

Oh, and by the way, the title of the last entry?  A semi-parody of “Hey Stephen” by Taylor Swift.

photo courtesy of the Associated Press 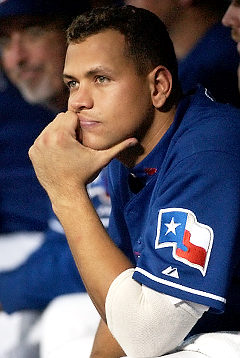 …’cause I thought I saw a light in you.

I distinctly remember sitting in a sports bar in Austin cheering for A-Rod to get his 500th home run.  I wanted to watch the Astros/Rangers game but it was on KNWS, an independent Houston station that doesn’t get to Austin, and even though KNWS was unavailable, FSN Southwest was still blacked out.  Long story short, no Astros for me.

So we sat in a booth and I ate a salad and craned my neck to the side to watch the Yankees on YES and every time A-Rod came up to bat, my heart quickened.

I don’t think I had as good of a grasp on what a jerk he was at that point, but even if I had, I was still excited because I thought he was clean.

Yeah, I know, that’s what everyone has been saying since yesterday afternoon when Sports Illustrated released a story that claimed that A-Rod had used PEDs during his stay with the Rangers.  Unfortunately, it’s true.  We (or at least, I) thought he was legit.  Hoped he was legit.  But it seems he’s going the Roger Clemens Way with a denial and nothing else.  You’d think these guys would learn from Andy Pettitte–if you admit to it, even if you lie, you win in the court of public opinion.  Andy still has a job.  Roger doesn’t, and he’s in a very ugly place right now.  Same with Barry Bonds.

A-Fraud will keep his job.  The MLBPA refuses to release anything besides a “we’re not talking.”  We might not ever know.  But the more Ster-Rod argues, the more suspicious he will look.

This isn’t just a “keeping the game clean” issue.  This is a legal issue.  According to the SI story, “Primobolan is not an approved prescription drug in the United States, nor was it in 2003.”  As I understand, that means it’s illegal.  Also, according to the lawyers for the MLBPA, the use of any names other than those ten linked to BALCO is not covered by the search warrant and therefore illegal.  Somebody’s going to get in big trouble for this.

Unfortunately for Rodriguez, once again, this is a case in the court of public opinion.  No matter if his name is ever cleared or if the judge rules that the other 94 names on that list cannot be used, there will be some people who always view him as guilty.

If he is guilty, then I am ashamed that he was ever allowed to wear the Texas flag on his left arm.  If he isn’t, well, I hope he can prove it.

Bonus points to anyone who can guess where I got the title for this entry.

photo courtesy of the Associated Press